What struck you about the AWID Forum? 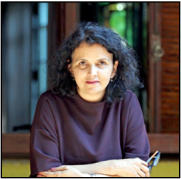 Ana Valéria: This was the first time I attended an AWID Forum, and my first experience of a feminist convening of such large scale. I was very much impressed to see activists, experts and funders from all over the world gathering in Salvador to discuss the Feminist Future, and the need to Build Collective Power for Rights and Justice. It was interesting to witness such a diverse meeting, where feminists of the most different backgrounds, women with disabilities, sex workers, trans and intersex activists, black, indigenous as well as young women engaged in serious conversations at the same time that they would demonstrate true solidarity and respect for each other’s struggle. The meeting took place in a very sensitive moment in Brazil, right after Senate had thrown out of office our first female President, bringing to end 13 years of Workers’ party rule, and replacing her by former vice-president, a center-right politician who since then has been opening the doors for the reduction of rights in the country. A lot of what the Brazilian society had conquered since dictatorship is currently at stake. I was impressed with the level of solidarity of the participants. Throughout the days, the situation and risks in Brazil got clearer, and the support got stronger. We saw marches, and heard global voices screaming “Fora Temer” to support the fight of Brazilian feminists who were claiming their rights.

Annie Hillar: I have been attending AWID Forums since 2002. My first was the Forum held in Guadalajara, Mexico, and was the first time I had experienced in-person feminism on such a global scale. The theme of that Forum was Reinventing Globalization, and brought 1,000 activists, academics, and organizations together to share, debate, and learn from each other about critical issues in women’s rights and feminist activism. This year’s Forum, held in Latin America for the first time in 14 years, brought together more than 2,000 activists, academics, organizations, and funders to examine the theme of Feminist Futures: Building Collective Power for Rights and Justice. What struck me about this Forum, so many years after my first encounter, was how expansive and diverse the conversation has become, and that we all see the key to achieving our collective aim of gender equality and women’s rights lies in collaboration within and across sectors. Most of the 200 participant-led sessions focused on linkages across thematic issues, populations, and movements, such as the plenary on bridging women’s rights and environmental justice organized by Global Greengrants, Prospera – International Network of Women’s Funds, and the Global Alliance for Green and Gender Action. Sex worker rights, trans* rights, Intersex rights, and the rights and voices of young women were woven into conversations about leadership, reproductive rights, and new technologies.

Mona Chun: This was my first AWID Forum. Coming from a first generation immigrant family focused primarily on the American Dream, I was first exposed to feminism in a graduate setting many years ago. But the feminist activism I encountered was led by women who had very different socio-economic, racial and ethnic backgrounds from mine, with different histories and views on agency and expression. That movement didn’t resonate with me. What I was thrilled to discover in Brazil was a vibrant space that embraced diversity. We celebrated the collective power and wisdom of women with disabilities, indigenous women, young feminists, tech feminists, black feminists, women’s rights advocates working from Geneva to conflict zones, those dedicated to land rights and environmental justice, from resistance movements to labor movements, and those using art, media and theater. This open and inclusive space championing everyone’s unique identities spoke to me. And for the first time I felt I was part of this feminist movement aimed at creating a more just, sustainable and peaceful world for all.

What are you taking forward?

Ana Valéria: Our new government is a very conservative one. Some relevant governmental programs have closed; the possibility of looking at human rights as a universal issue is not in place anymore; spaces for public participation have been closed or simply disappeared; and in the meantime, we see that the criminalization of activism on human rights and environmental issues increases. The meeting in Salvador and the major solidarity movement that we were able to see there is what we need to help bring what is going on in our country to the international debate. We need to bring to light the situation in Brazil at the moment, and feminists from all over the world have set an important precedent in Salvador.

Annie Hillar: A key takeaway from the Forum was that for all human rights to be realized, we can no longer afford to operate as independent, isolated actors, and as AWID Board Chair Myrna Cunningham said at the Forum’s opening, “none of us is free until we are all free.” The sense of urgency to act now and together was emphasized by Dilar Dirik, from the Kurdish Women’s Movement, in her remarks during the closing plenary, that it “is important to implement our utopias in the here and now. We must never postpone the future.”

Mona Chun: Gulp, I offered to host a funding hackathon! At the pre-Forum Day for Donors, convened by Philanthropy Advancing Women’s Human Rights (PAWHR) and Prospera and co-sponsored with IHRFG, among others, Monica Enriquez of Astraea Lesbian Foundation for Justice spoke on the panel, “Hacking the Funding Architecture.” She suggested we needed to convene a funder hack-a-thon and I excitedly stood up and said, “We’ll host it!” So what exactly should we try to hack? How we truly work to “break down our silos” in human rights philanthropy? How we shift gears to multi-year core support for all? How we best evaluate impact? How we can stop sucking the enthusiasm and energy out of our grantees with burdensome proposal and reporting requirements? But given how many times I’ve already heard the pleas for these changes, I have to ask, are we truly ready to hack our practices? One passionate activist at AWID suggested an idea that would turn us all on our heads, “Why not try equal income distribution and give every single NGO the same amount?” If you’re ready to envision radical change, join our first funder hack-a-thon planning committee, or just write me to share what we should hack!